Last night, Mitchell Trubisky made his NFL debut against the Minnesota Vikings. The Vikings won out, in the end, all the while playing musical chairs with Mr. Glass and Ol’ Scrambled Brains. Trubisky played pedestrian-to-mediocre with a turnover near the two-minute mark that cost the Bears the game, but Bears fans seem to be comfortable living in a reality that’s quite different from ours.

Let’s hear it from some Bears fans:

@Mtrubisky10 is my guy. I’ll roll with him from here on out. Give him a couple of weapons to throw to and he can be special. pic.twitter.com/Vsu5PAGJzE

Despite the lost, I ? good things to build on… @ChicagoBears #BearDown @NFL @Mtrubisky10 ?⬇ 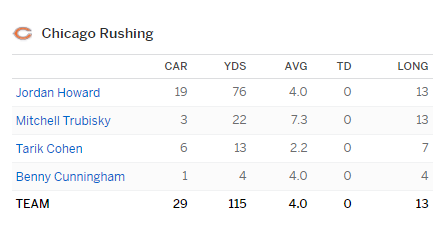 The numbers themselves really aren’t something to go nuts for, especially the ESPN QBR of 11.00, a QB Rating of 60.1, a 45.8% completion rating, 5.1 yards per attempt, and that Trubisky had more turnovers (2) than TDs (1) (although to be fair, you could argue that the fumble was really more on Bears starting LT Charles Leno, Jr. getting manhandled by DT Linval Joseph), . It’s also worth noting that in the 2nd half of last night’s game, Trubisky went 3 of 8 on pass attempts for 39 yards, a TD and a pick.

Meanwhile, Deshaun Watson, the 2nd QB taken in this year’s draft, picked 10 spots below Trubisky (but the 1st “Deshaun/DeShone“!), is playing like a demon for the Houston Texans having racked up 12 total TDs in his last 3 games.

Most of what plagued Trubisky was his accuracy. If there’s one thing you need to be a successful quarterback in the NFL is you NEED to be accurate with your passes. In two of the most pivotal moments of the game, although each ended in wildly different results, Trubisky’s inaccuracy is at the center of both of them.

Trubisky and the offense are lined up in an Ace and looking at cover-1. It’s a bootleg with two receivers running across to the weak side and TE Zach Miller running a corner route into the end zone. Once Trubisky sees that everyone downfield is covered, he makes a small signal to Miller to cut in. Miller makes a move toward the middle of the end zone and succeeds on getting a step on Safety Andrew Sendejo. Trubisky sees this and lobs the ball over to Miller. The problem is, his lob is a lame duck with fairly low velocity, so before the ball can even get to Miller, Sendejo is already there to make a play on the ball. What happened next was just pure luck: Sendejo tips the ball directly into Miller’s hands and Chicago scores. If Sendejo was a slightly more athletic safety, that ball is picked off 4 times out of 10 and batted away 9 times out of 10.

Here’s the pick that sealed Chicago’s loss with 2:32 to go in the game:

Nothing about this play goes well for Trubisky, as the offense is lined up in a Shotgun-Ace with a slot receiver on the left with the Vikings playing cover-1 again with a nickel corner to cover the slot. When the ball is snapped, the Vikings are playing man-to-man with the MLB (Mike) playing zone/spy. Everyone downfield is covered and, just like the TD before, he looks for Miller, who is able to get a small step and get some separation from Safety Harrison Smith. Again, Trubisky lobs up a duck expecting it to sail past the defender, and again much like his first TD, the defender was still able to make a play on the ball but except for this time, Smith was able to the pick the ball off and end Trubisky’s would-be first two-minute drill on one play.

Granted that 2-point conversion following the TD was pretty spectacular, but much like Prescott’s last minute TD against Green Bay, that play was less on the QB and significantly more on the play call.

Am I saying that Trubisky is a bust? Of course not. I’m sure he’ll get better as the season progresses.

Did he have a spectacular game the way it’s being celebrated by ESPN and Bears fans? No, not by any stretch of the imagination.