Mascots UTRGV Could Have Used and Why They All Sucked (Yes, Including Bucky)

So, we’re about a few months into the Vaquero / UTRGV era, leaving thousands of UTPA alumni (and maybe 3 from UTB? Maybe?) still crying foul over their new mascot, calling for the dissolving of the Board of Regents, and for Guy Bailey’s head on a pike.

Most of the crowd fervor comes from the board of regents/Guy Bailey recommending and subsequently selecting a mascot that was not one of the 10 student-survey finalists that was posted on the UT system website. Taking a quick glance of the finalist list and you really couldn’t have gotten THAT upset for Guy Bailey going off the grid. I mean, when you’re given a list THAT shitty to choose from, and if you have the power to make up for that list, then fucking do it. It’s like if you were to ask your kids for a list of suggestions they wanna eat this week. Try it. They’ll probably write down things like “Cake” or “Pizza” or “Chocolate.” As a parent, you have a responsibility to not listen to your kids dumb shit suggestions and choose things that are in your kids’ best interest.

So when Bailey asked students for a list of suggestions and sees dumb shit mascots like “Mockingbird” and “Bull Snake,” you can’t blame the man for giving students a 2nd chance by including some more sensible, less half-assed suggestions like “Vaqueros,” “Phoenix,” and “Storm.”

Let’s breakdown some of the potential mascots that could have been a lot worse:

1) Aztecs – Probably the most logical choice. San Diego State already has the nickname, so Aztecs really should’ve been a shoe-in. But…the world is a cruel dark pit, students. It’s relentless and unforgiving. The fact that the Aztec was not chosen should be a permanent reminder that the world will always give you the finger when you most deserve it. RIP Aztecs

2) Barracudas – UGHHhhh…could you have imagined that dumb song ALWAYS, ALLWWAYYSSS playing at UTRGV games? “Ooooooooooooooooooooooooo….BEARAAHHHCUUUUDAAHHHH” Fuck, shoot me now please. That would have gotten old so fast.

3) Bears – Yeah RGV. Because we got a TON of those running around right?

4) Sharks – Why is this always the default mascot for a made-up EA Sports, or fake TV high school/college football team? Because it’s so generic, no one would ever relate the mascot to a real team. It’s been so overused as a made up team that people wouldn’t have even believed the UTRGV Sharks are real.

6) Tortoises – Tortoises??…Tort….Tort-illa. (GASP!!) ISSS OFFENSIVE!!!! No, but seriously, who the fuck would ever wanna run track or play basketball for the Tortoises? Nobody.

7) Phoenix – The mascot that won the student vote in the 2nd round. The problem with the phoenix, other than the fact that UTRGV alumni would have to associate themselves in an interview by saying “I’m a Phoenix” and having your interviewer mistake you from a University of Phoenix grad…and promptly throwing your resume in the garbage, is that the Phoenix is from Greek mythology and not at all related to Latino culture…what so ever.

8) Red Wolves/Foxes – Again, did these students just open a coloring book, see animals and think “Ok THAT ONE!” and list them here?

9) Mockingbirds – Fucking Hunger Games. I bet you some dumb prick tried to put “Mockingjay” in the final 10 hoping that their university would embody the book series that will ALWAYS be popular, right?

10) Ozzie the Ocelet – Ohh…ohh Ozzie. Have any of you actually seen this mascot? I mean, just look at this thing. 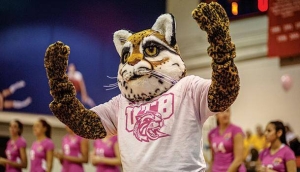 Ughh, thank God only 5 people have ever graduated from UTB cause….Jesus. Look at his face. Even Ozzie doesn’t want to be Ozzie anymore. Ozzie the Ocelot has to take 10 Zolofts to wake up in the morning to feel good about himself. Just put him out of his misery.

11) Bucky the Bronc – RIP Bucky. You’re a throwback (1927) of an era where you had to drive miles to find a Martinez around here. Yes, an era graced by good ol’ fashioned soda pop, hot-rod diner, racism. Remember that, white people? I bet most of you lounge away in some retirement home in some white part of McAllen or Harlingen wondering “What the Hell happened to this place? It used to be so….so..so much nicer, you know?” as “Rozeetah,” helps change your bed pan and feeds you mushed up “IN-CHA-LADDA” soup. You wait patiently for death’s cold grip to take you far far away from this place as every Christmas a bunch of brown-skinned, lightly mustached kids stop by sing you “Feliz Navidad.” It’s over, you guys. We came. We saw. We picked. We built. We conquered. Now, I know most of you are now baby boomers and probably had nothing to do with what your, mostly, racist parents did, and actually everything to do with helping tie relationships with your Mexican brethren, still.. fuck you AND THE HORSE YOU RODE IN ON.

12) Vaqueros – Tamale Tech is full Tamale again, folks. Soon, most of our students might be calling our Professors and Doctors “Sir” and “Miss.” Speaking in broken Tex-Mex to each other and telling the world your not ghetto when you know daaaamn well that you ain’t from Shary. Students in droves from Las Milpas, Ghost Town, La Joya. RAZZZZZZAAAAAA students coming for their degree…
…wait…..Are you saying that’s ALREADY been happening? Fuck…well, guess we finally got the perfect mascot after all, huh..

In the end..get over it UTPA alums.

Welcome To The Bench Wire.com

NPR: American Red Cross Only Built 6 Homes In Haiti After $488 Million In Donations